GENTRY: And now, Great Art at Eastern, from the Portales campus of Eastern New Mexico University. I’m Jeff Gentry, Dean of the College of Fine Arts, here on KENW, your Public Radio Network. Today. My guest is Rebekah Majkrzak, a senior music education major. And thank you. Rebekah for joining me today.

MAJKRZAK: Hi, Dr. Gentry. It’s so nice to be here.

GENTRY: Well, you know what? You play clarinet. But not everybody who plays clarinet does jazz. What do you love about jazz?

MAJKRZAK: Well, I’ve gotten to hear you many times in the various ensembles and- and groups, and it’s really great to have you on the show today. So, ENMU’s JazzFest takes place tomorrow and Saturday.

GENTRY: What are you most looking forward to at this year’s festival?

MAJKRZAK: Um, I think I’m most looking forward to the piece that I’m in. Which will be on Saturday and I will be playing Wizard. It’s very exciting and we’re having a couple of Large people in the jazz world come into play with us.

GENTRY: Right, this is a big deal. JazzFest, led by Doctor Richard Schwartz, is just this fantastic Momentum building event. You know the full two days, you’ve got a high school competition associated with it this year

GENTRY: -And so, tell me a little bit about our headlining artist Sean Jones on trumpet.

MAJKRZAK: Um, he is very well renowned. Um. Yeah, he does. He’s really wonderful to have.

GENTRY: Right. And so, he is the musical director for the NYO Jazz program at Carnegie Hall in New York.

GENTRY: So, he brings in young people every summer to perform and- And so have you gotten to hear him doing- Do any of his work this week?

MAJKRZAK: I haven’t heard him in person yet, because he’s not here yet, but I very much look forward to, Yes.

GENTRY: That’s great. And then you’ve got some other great folks from- from past years. The- the Faculty and guest quintet. And so, you’ve heard them before.

GENTRY: That’s great. And Rebekah, what do you know about the high school jazz competition?

MAJKRZAK: I know Jazz is a very competitive, um- Like setting for band. A lot of bands will go to competition, similar to marching band on the compete. It's sort of like a battle of the bands thing. Although I think this is a bit more of a friendly competition.

GENTRY: Great and I know that the faculty and guest quintet plays on Friday. And when are you performing?

MAJKRZAK: I will be performing on Saturday.

GENTRY: OK. So, they’re different things. There’s concert one on Friday and concert two on Saturday. And so you’re in one of them and but I think Shawn Jones is going to perform both days, right?

MAJKRZAK: I believe so, yes.

GENTRY: Great. And- so, Rebekah, what do you think about the JazzFest being in-person this year, whereas last year it had to be online.

MAJKRZAK: Oh, I’m so excited. Um, so a lot of the band last year online was just over Zoom, which well, has some unique quirks to it. It’s never quite the same. So being able to be in person with my fellow colleagues is very exciting to make music again together and just hear how much everyone’s improved since our last time.

MAJKRZAK: I might pop in and out. I know that the students we playing the students from Eastern will wear their Eastern attire. So, if you happen to be walking around, you’ll be able to pick them out from the crowd.

GENTRY: Fantastic. Well, JazzFest one tomorrow. JazzFest two on Saturday. And Rebekah, thank you so much for being on Great Arts at Eastern.

GENTRY: And you can find all the Great Arts at Eastern at enmu.edu/fineartsevents. I’m Jeff Gentry, thanks for listening on KENW, your Public Radio Network.

artist Sean Jones, trumpet, and the 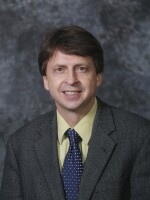